The SIS-Zanzibar is an exciting and innovative project that aims to reduce malaria transmission by providing 'spatial intelligence' through the use of smartphone technology and drones. The project takes place in Zanzibar who are on the cusp of eliminating malaria from their islands - but to achieve these ambitious goals they need to look towards innovative interventions like the use of drones to find the water bodies that malaria mosquitoes use to breed and lay eggs. 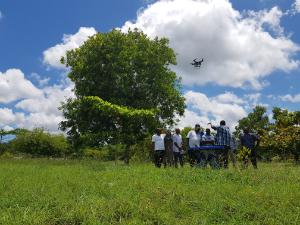 Malaria continues to burden a large number of countries and territories located across the globe but mainly in less economically developed tropical areas in Africa, Asia and Latin America. There is an estimated 300-500 million cases of malaria infection per year, 90% of which occurs in sub-Saharan Africa.

The Earth Observation Laboratory is developing tools for identifying malaria vector habitats by exploiting information from remotely sensed data and its products. In doing so, malaria control activities can be targeted in areas where it is needed most to help eliminate this disease.

A number of freely available metrics describing the physical geography of Zanzibar was used to predict spatial hotspots of malaria infection. Specifically, datasets such as elevation, land cover and geology were entered into a machine learning algorithm (boosted regression trees) to predict malaria infection rates recorded at health facilities across the island. This model provided accurate maps indicating spatial hotspot of dry season and wet season malaria infection, indicating that cases of malaria were associated with specific geological landforms that sustain permanent breeding habitats for malarial mosquitoes (Hardy et al., 2014). Using high resolution (50 cm) aerial imagery, individual habitats could be identified and mapped so they can be used by the Zanzibar Malaria Control Programme for targeting interventions as part of their efforts to eliminate the disease on the island.

For ore information on the SIS Zanzibar project you can listen to the fantastic TED Talk by Dr Andy Hardy here, or listen to his podcast here.

Funding from Aberystwyth University’s Doctoral Career Development Scholarship (Georgina Ettritch) is supporting a project into the use of remote sensing to link geomorphological mapping with the presence and dynamics of malaria vector habitats. Specifically, automated methods are being developed to map areas of “negative-relief” (Lewin and Ashworth, 2014) in the floodplains of major rivers using digital elevation and optical data. These areas are likely to provide shallow water bodies with the potential for supporting malaria vector larval development. This methodology is being assessed within the Dyfi River catchment in mid-Wales before being applied to catchments within malarial regions of the world, such as the Gambia, West Africa.